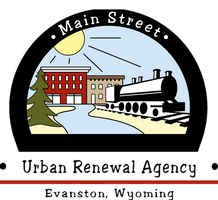 Evanston, WY is a vibrant and charming railroad town named for the Union Pacific Railroad (UPRR) surveyor, James Evans, who first assessed the eastern half of the track’s route through the Wyoming Territory. Nestled in the far southwest corner of Wyoming, within the picturesque Bear River Valley, and just an hour’s drive from Salt Lake City, UT, Evanston is the county seat and the hub of commerce for the region. Evanston’s beginnings are deeply connected to the railroad, and the community boasts the only intact roundhouse along UPRR’s mainline from Omaha, NE to Sacramento, CA. The semi-circular structure, which was used to repair train engines and railcars, was built in 1912 by the railroad, and today several of the buildings on the site and a portion of the roundhouse have been renovated by the city as community event space (and potential commercial space).

Evanston’s first structure and business enterprise was a tent saloon erected by Harvey Booth in November of 1868. Soon after the town was established, a small commercial district arose in a four-block area adjacent to the UPRR tracks. One of the earliest businesses was the Blyth & Fargo Company, a general store created in 1872 on Main Street. Today, there are several businesses operating in this historic structure and many more are sprinkled throughout Evanston’s 19th century architectural streetscape.

We look forward to your next visit with us!